x Thank you for submitting an inquiry. We will get back to you as soon as we can.

The Sierra Nevada of Santa Marta is an isolated mountain range independent of the Andes chain; it rises to 5,775 meters above sea level and contains a unique ecosystem. Here is located one of the world’s greatest ruined cities “Teyuna” in the indigenous language, “ Buritaca 200” between archaeologists but commonly called “Ciudad Perdida” (The Lost City).

Ciudad Perdida is a magnificent example of a pre-columbian Tayrona settlement, located at the source of the river Buritaca it is situated at 1200 meters above sea level. At the end of the 1970´s Colombian archaeologists rescued two hundred of the original terraces, streets and paths, a system of aqueducts and a sewage system from the stranglehold of the Jungle. This is the largest of the many pre-Columbian cities in the Sierra Nevada, remarkable for its spectacular scenery and striking landforms.

This trek takes a minimum of three days of ascent and two of descent and includes one night in the archaeological centre. We stay in rustic campsites along the route and sleep in hammocks and sleeping bags. The guide will provide you with varied meals of both typical and international dishes and can cater to special diets and vegetarians. Please advise Turcol of your needs when you make your reservation. It is advisable to bring insect repellent and you will need to carry the clothes, sleeping bag, toiletries etc that you will need for the trek – check the excursions page for a complete list.

There are two main ways to arrive at the city:

The route favoured by previous visitors and the one that our company uses, ascends beside the bank of the Guachaca river, crossing the region of El Mamey (We arrive here by vehicle from Santa Marta - two and a half hours on a rough road) From here we begin the trek, passing through two small indigenous towns: Mutanshi and Koskúnguena, the latter is almost abandoned. At the end of the path is a great stone staircase of more than two thousand steps, scaling these ancient steps we enter the ruins. On this route we cross the Buritaca River on several occasions. If there is a risk of the river being too high to cross safely there is an alternate route, it is shorter, but the landscape and scenery are of less interest.

The other way also involves travelling for a stretch in a jeep. This goes to Minca, and from there, to Tagua, down a road in a bad state of repair. From Tagua the first days walking is very picturesque, crossing several zones of deep rain forest which can get foggy at times, alternately ascending and descending until it arrives at "Filo Cartagena" (Cartagena Edge) where there is a small travellers refuge run by one of the foundations dedicated to the conservation of the mountain range.

The second day is also picturesque but much more challenging! The path takes us beside crystalline rivers of great beauty and finishes in “Alto de Mira” (Stop of Sight), another station equipped for travellers, on the ruins of a partially excavated Tayrona settlement; the third day is a very demanding trek through difficult terrain (inescapably on foot), crossing the rivers Guachaca and Buritaca.

We urge you to enjoy the beauty of the journey by taking it at your own pace. Take advantage of the knowledge of the guide who can give you information about the flora, fauna, and Tayrona culture both present and past. Take charge of your own experience by letting the guides know about your needs and interests.

Beyond discovering the mystery and wonder of La Ciudad Perdida (The Lost City), this excursion will take you down the pre-ispanic pathways of the Tayrona people and lead you through a series of breathtaking landscapes that start at the sea level and finish at 1100 meters above, where you will encounter Tayrona communities and get to know a little about their distinct culture. 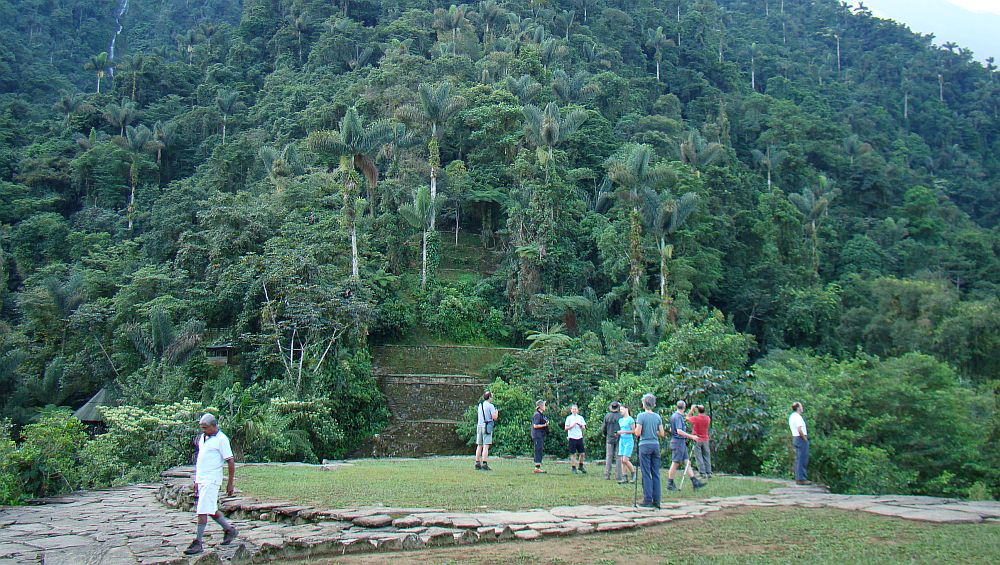 We leave at 9 am from the City of Santa Marta for the Region of El Mamey in a jeep, on a route that lasts approximately 3 hours. From El Mamey, a small village of people originating from inland Colombia, we begin the long walk upwards until we reach our first campsite, prepared with hammocks, where we will spend the night and can refresh ourselves in some natural swimming pools.

We wake early for a breakfast at 7 am then at 9 am we start again, beginning with a short stretch of path that descends down into a small valley formed by the river Buritaca where there are some indigenous constructions forming the small town of Mutanyi. We have 3 more hours of walking before we reach the cabin where we will spend the night, on arrival we can cool off in the natural pools formed by the Buritaca river.

We wake even earlier today for breakfast at 6:30 a.m. and at 7 am we begin to walk through sections of the indigenous reserve Kogui - Arsario and the natural park Sierra Nevada of Santa Marta, passing by several indigenous houses and some remnants of ancient roads built hundreds of years before by the inhabitants of the area. We cross the Buritaca river to arrive finally at CIUDAD PERDIDA (sacred site for the present inhabitants of the Sierra Nevada), during the journey we can pause for a cool off in the river as there are some good swimming spots along the way.

DAY 4- EXPLORATION OF THE LOST CITY

Sleep in! We have breakfast at 8 am after a deserved rest. At 9am we begin our adventure into the park, learning about the different ways the pre-Hispanic Tayronas adapted to their environment, we will also have an opportunity to see the ceremonial houses of the present day Tayronas and the vegetation that forms a unique backdrop to the prehistoric legacy. Along the route it is also possible to take a bath in the pool of youth, which according to the legend works wonderfully well. At the end of the tour, some notes about the archaeological sites of the mountain range are available to read, and a short informative chat about the site can be arranged with the guide.

DAY 5- BACK DOWN THE MOUNTAIN

Breakfast to 6.30 a.m. is necessary for a departure at 7 a.m. We need to take advantage of the morning hours so the journey is less arduous and also in response to the atmospheric conditions of the region as they are variable and can change quickly. At Mutanyi cabin we will have lunch and then continue until we arrive at the first campsite where soda and beer will be available.

Our final breakfast is at 7 am and we leave the campsite at 8 a.m. We walk for approximately 3 hours, taking a rest for one hour at El Mamey where we meet the jeep, from there we will drive to the entrance of the park and rest for a while to have a snack, continuing to Santa Marta where we will arrive at approximately 4pm.

WE RECOMMEND YOU BRING:

We are sorry, there are no reviews yet for this tour.

How may we assist you?